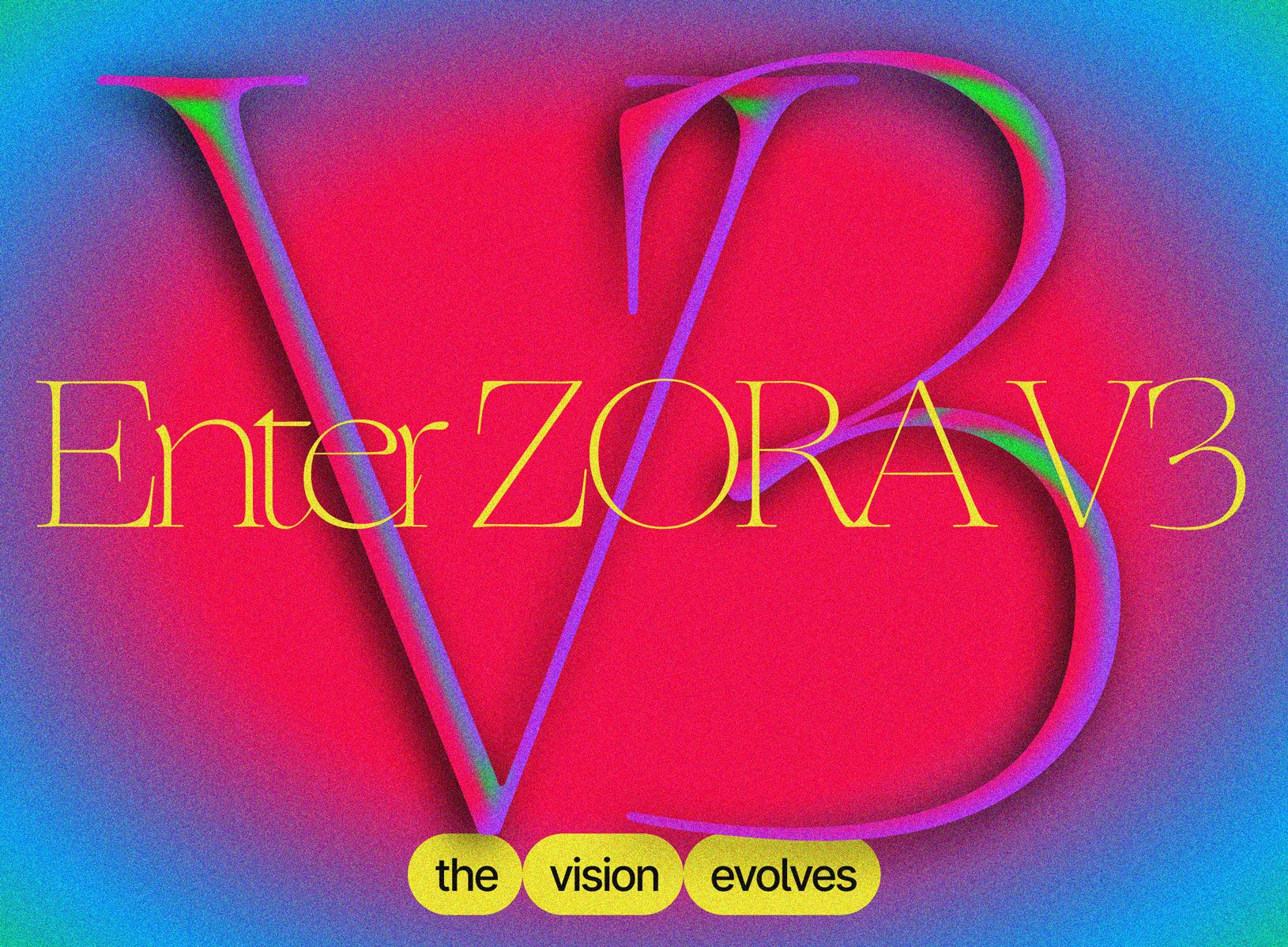 After months of building alongside our rich developer ecosystem and processing >$100Ms of bids across multiple marketplaces, platforms, and protocol integrations—we’re excited to be announcing V3 of the ZORA protocol.

We’ve taken countless learnings from our public experimentation and created the most gas-efficient and feature-rich onchain marketplace that exists on Ethereum today.

ZORA is the NFT marketplace protocol—it never goes down, it’s composable, immutable, universally accessible, and censorship-resistant. Think of it like the secondary marketplace for everything and for all.

ZORA V3 includes some novel mechanisms that incentivize platforms built on the protocol, as well as a groundbreaking modular architectural design that allows for a permissionless system that can continue to deploy new versions. We’ve also created a new ownership structure in the form of Zora Fee Switch NFTs (ZORFs) that are owned by the Zora DAO (more on that soon).

The first module we have deployed on mainnet is the ability to list any ERC-721 NFT onchain at a fixed price—commonly known as “Buy Now”.

ZORA V3 is available on Rinkeby and Ethereum Mainnet, for developers to utilize in our Developers Tools, and everyone on zora.co

Here’s an outline of some of the core features of ZORA V3: 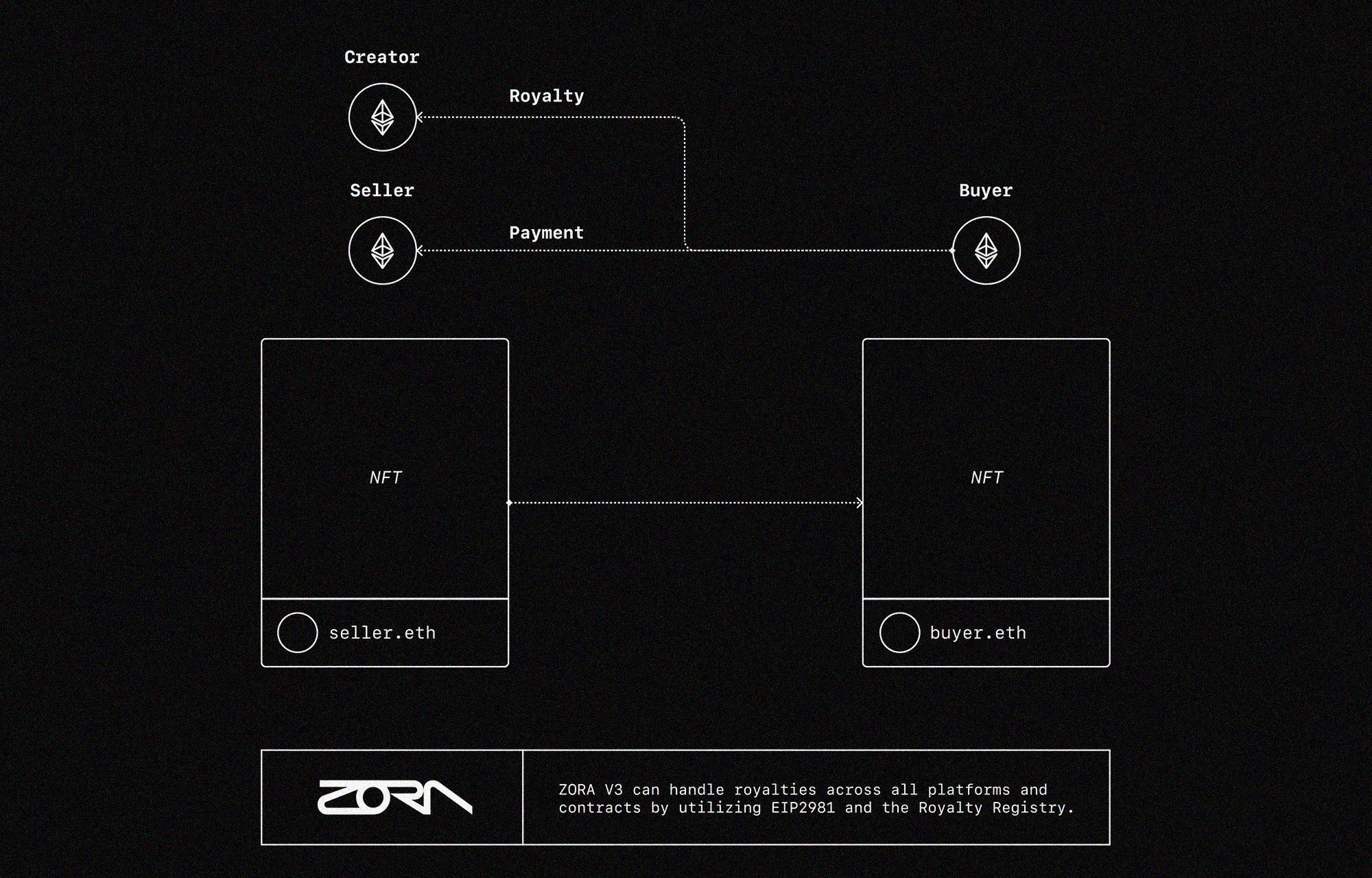 If an NFT from Art Blocks, Foundation, Manifold or a custom collection built with EIP-2981 Royalty Standard is bought and sold on Zora, the royalties will be paid out instantly and trustlessly onchain—no need to wait for weekly payouts like traditional platforms.

This unlocks an entirely new dimension of programmability for developers who want to build applications and protocols that handle royalties.

We’ve also integrated the Royalty Registry, meaning any collection owner can configure their royalties on the Zora Marketplace Protocol, regardless of the platforms or tools used to create that collection. You can find the tool here.

This is a groundbreaking moment, as Zora is the first marketplace to have complete royalty coverage. 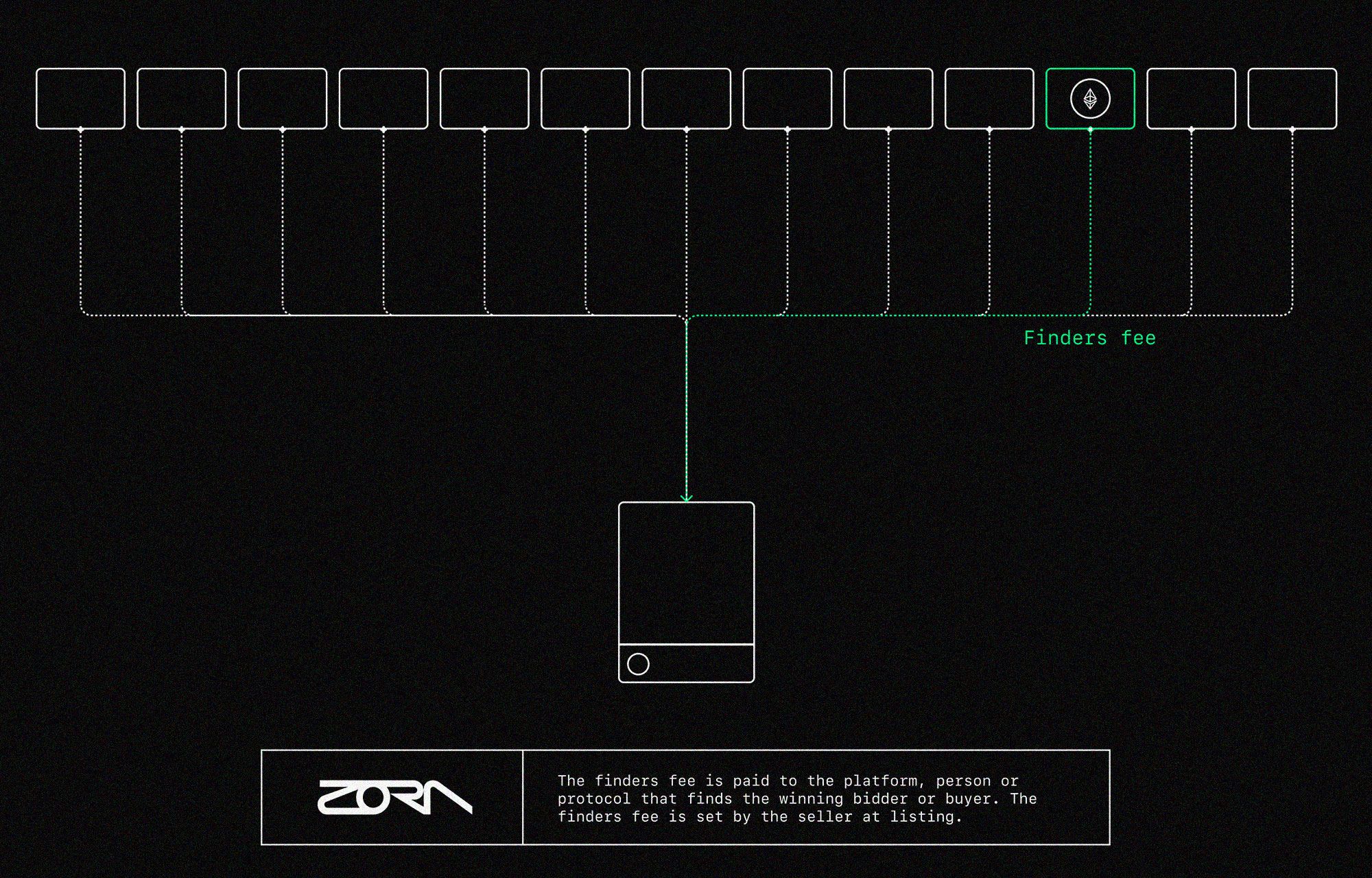 One of the most valuable actions in the NFT space is curation. This can happen in many ways: displaying something on a homepage, embedding in a blog post, or sharing a link on Twitter.

The finder’s fee is a mechanism that allows people to incentivize the market to find the eventual buyer of their NFT. This is set when you list an NFT.

To earn a finder’s fee, simply include your address—either programmatically in a UI or by generating a link—and you’ll earn that reward if you find the buyer.

Of course, savvy buyers can always claim that fee as a discount themselves. However, it’s proven that great platforms and services consistently earn fees even though free options are available, like a swap in MetaMask or Coinbase Wallet.

This is a powerful incentive for builders and curators to integrate the ZORA protocol and capture the value they are creating directly. 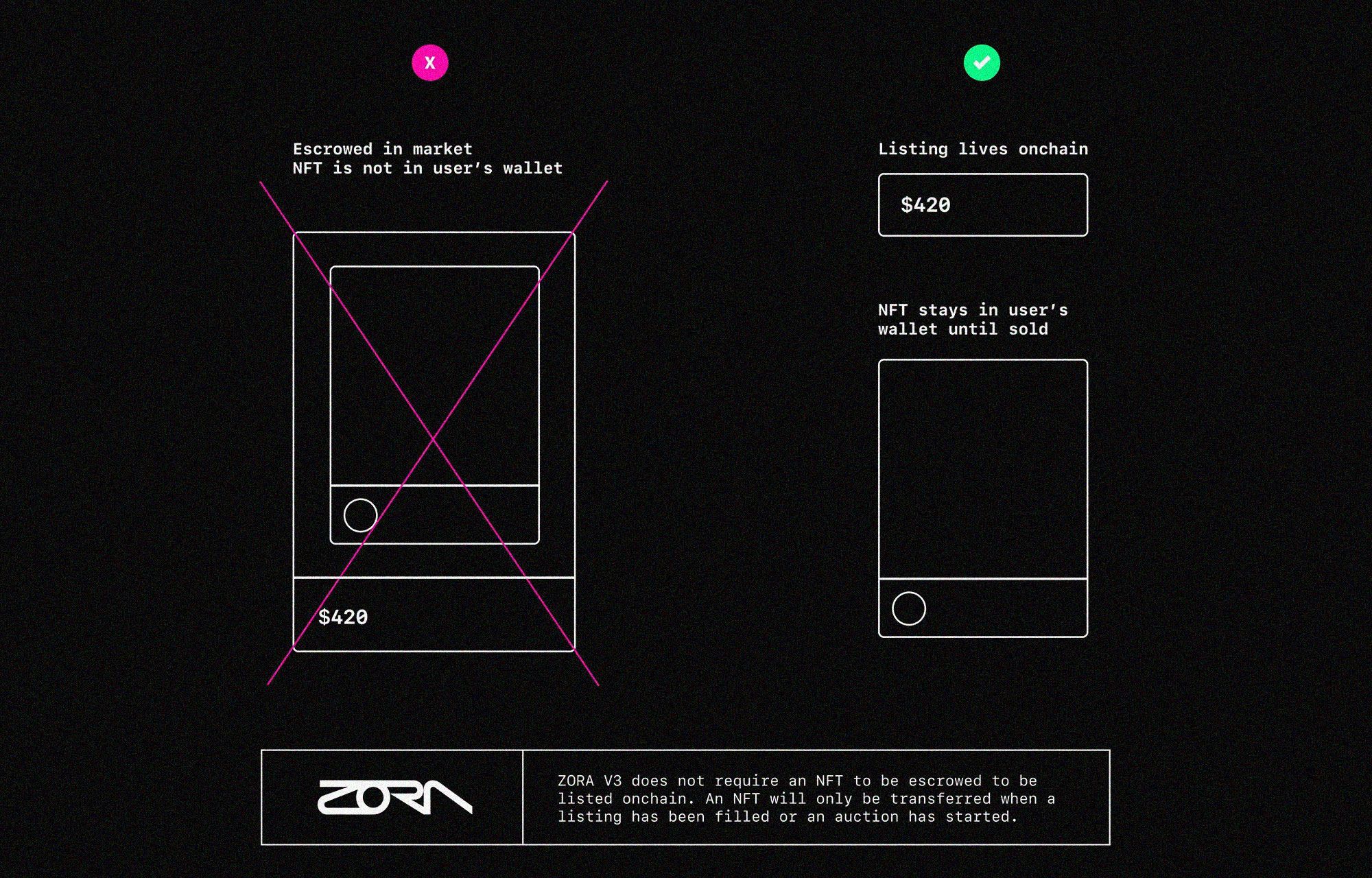 It’s common for listing an NFT onchain to require escrow in the marketplace. We’ve designed ZORA V3 with UX in mind—so when listing with Zora, the NFT stays in your wallet until the listing is filled.

This means NFT owners can continue using their NFTs and see them in their wallet while still listed on the market.

ZORA V3 is a one-way deployment, meaning it cannot be stopped or changed by anyone at any time. If platforms built on top of it go down, the market will still function properly because the orders live onchain, not in a database.

If you’re a developer, you won’t need a single API key to interact and build on top of the market—you can access all of the market functionality directly onchain.

To fully harness the power of a decentralized network, every action costs gas; you are paying for the constant and universally accessible benefits of an onchain market—but there’s still a cost. We’ve spent countless hours optimizing the protocol to be as gas-efficient as possible.

It’s 39% cheaper to buy using the ZORA protocol than the next best option: Wyvern Protocol (used by OpenSea). Whilst the options above are free to list, this comes at the expense of composability and uptime.

On top of being gas-efficient and providing a direct incentive for developers in the form of the finder’s fee, we’ve included the ability to specify a fundsRecipient(). This makes it easy for protocols and applications to integrate splits, DAOs, lending, and countless other use cases that rely on listing.

We’ve also created market-leading developer tooling that enables building without having to write a single line of Solidity.

Check out our docs here: docs.zora.co

ZORA V3 has a novel architecture which allows for the Zora DAO to deploy new market types and updated versions.

Each deployed version of a market module is permissionless and can never be changed, but the DAO can deploy the module into the approval space of Zora. This facilitates developers to choose which modules they use and easily utilize new versions without entire migrations (like the one we’re doing from V2 to V3), and lowers the amount of total gas that’s required to be spent. 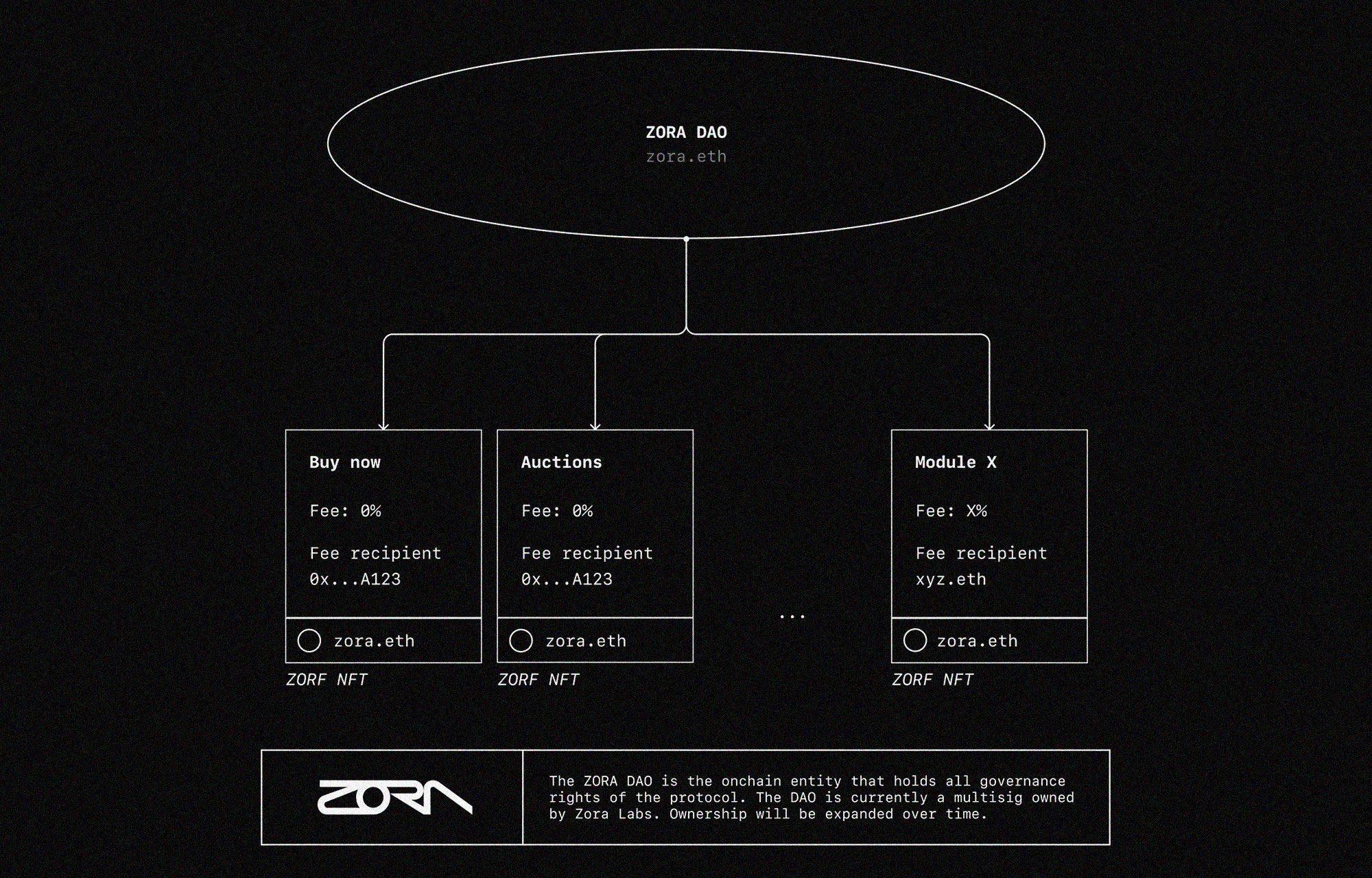 The Zora DAO has entered the chat. Right now it’s a multisig in control of Zora Labs. It holds the governance rights to deploy new versions of the protocol as well as holding the Zora Fee NFTs (ZORFs).

Our goal is to progressively expand and decentralize ownership of the Zora DAO to the community. 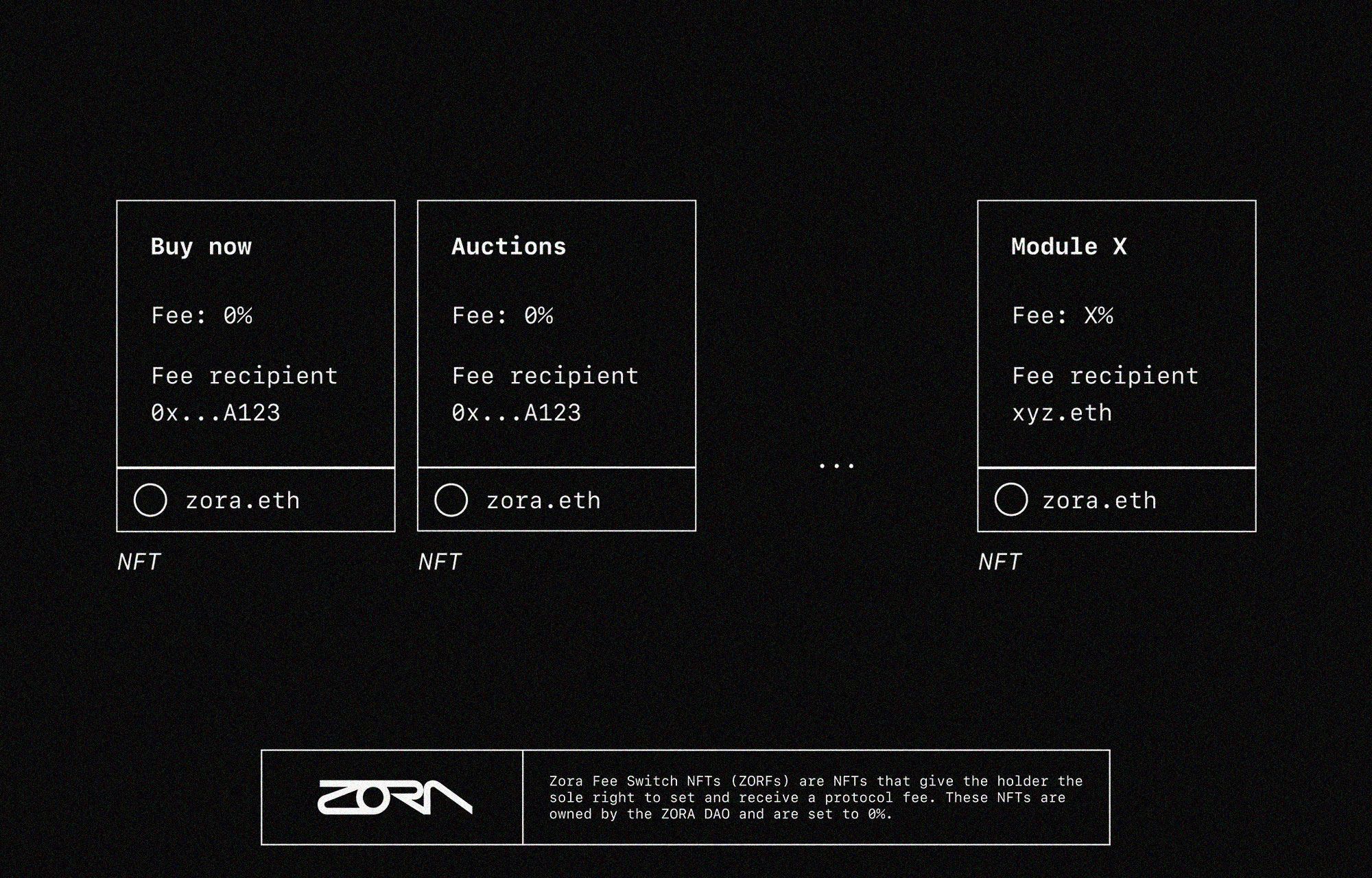 We fundamentally believe that Hyperstructures like Zora can be simultaneously free for everyone to use and extremely valuable to own.

This is counterintuitively enabled by the presence of a fee switch: a governance right which allows the DAO to turn on a fee.

We have made this governance right an NFT, which you can view on Zora here. The holder of this NFT has the right to set the fee and receive the fee; it’s owned by the Zora DAO.

By making this governance right an NFT, this right could be theoretically transferred, or sold, by the DAO. It’s helpful to conceptualize the value of this right as an NFT, because it immediately illustrates how it can be valuable even while set to 0%.

Imagine you held this NFT in your wallet: it gives you the ability to set the fee for a particular module and decide where those fees are received. It’s a tremendous amount of responsibility—a strong ownership right and something that’s extremely valuable to own and control.

By making module fee switches NFTs, it also opens up expansive new opportunities to collaborate and reward the community for creating a module that gets added to the Zora marketplace protocol.

We believe that this new design unlocks an entirely new dimension to protocol ownership and onchain partnerships.

We’re creating a generic implementation of this Protocol NFT model and looking for collaborators to submit an EIP. If you’re interested, please reach out.

We have an up to 25 ETH community bug bounty for any vulnerabilities discovered. If you find any vulnerability that could result in the loss of user funds or NFTs, reach out to t@zora.co or support@zora.co