The London-based multihyphenate speaks from his Camden compound with Zora Zine's Editor on "Reverse Again," his maiden Web3 series 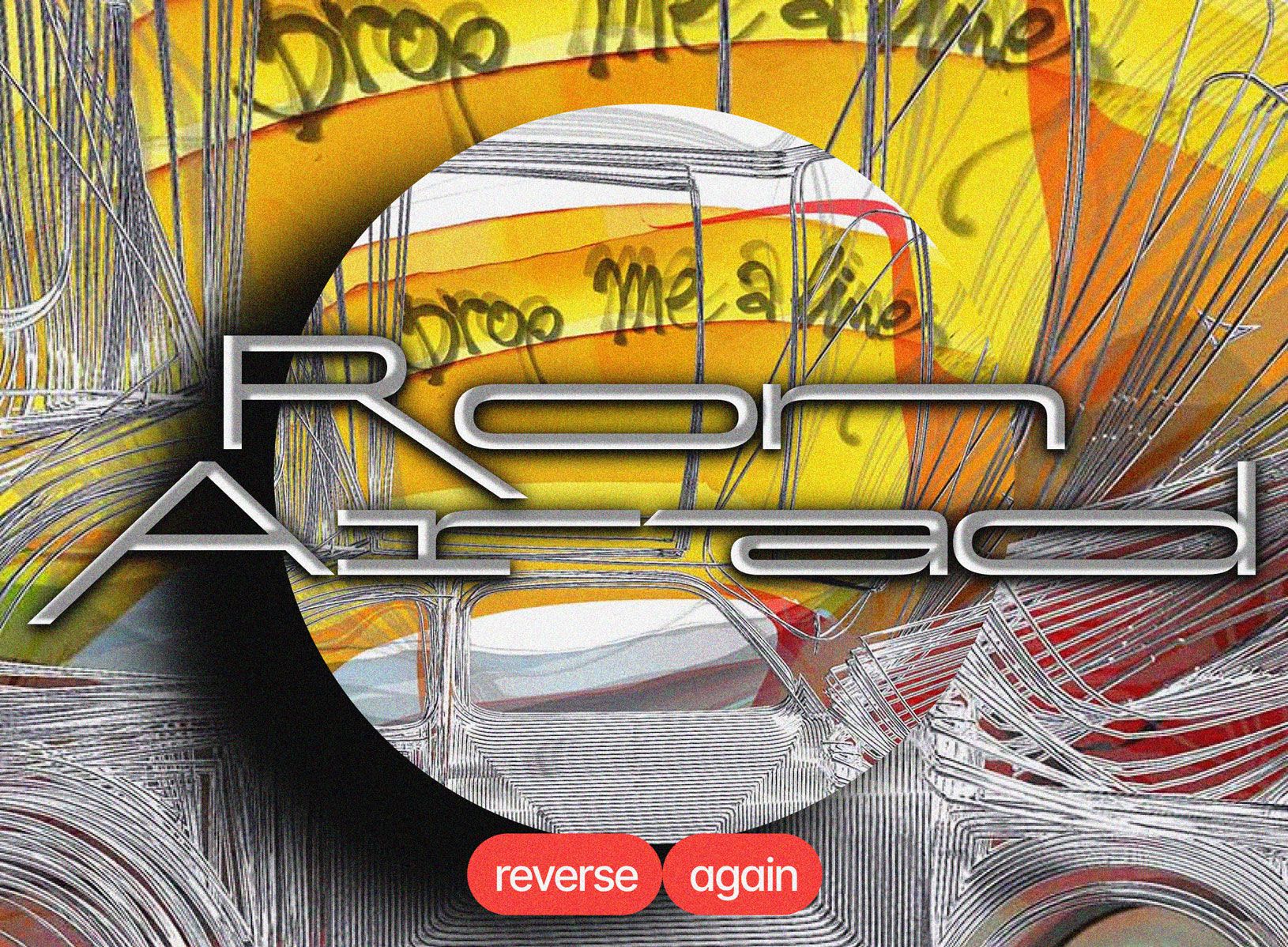 It’s eight in the morning in Los Angeles, and I’m looking at Ron Arad on my screen. He’s lounging in his compound on a typical gray Camden, London afternoon. He asks if I’ve eaten breakfast, and, tongue-in-cheek, if my cat, who makes a cameo and slithers around the living room, is real or virtual. (There’s probably some quip about Schrödinger in there, although I don’t really understand the paradox.) We’re not five minutes into our chat and already diving deep into architectural principles, his experiences working in physical formats versus simulations, and of course, NFTs, the latter of which is the nucleus to our conversation.

It becomes strikingly clear that Arad, who’d just recently celebrated his 71st birthday, is no stranger to individuals courting him for his design acumen and artistic sensibilities. “We were approached by lots and lots and lots of people with requests for NFTs,” he says to me. After all, the Rover Chair, Bookworm bookshelf, Design Museum Holon, and countless collaborations with KENZO, Vitra, Swarovski, and many more, are proof of his multidisciplinary shapeshifting. “Designers accuse me of being an artist, artists accuse me of being an architect, and architects accuse me of being a designer,” he said in an interview with the Guardian from a few years back. “But that doesn’t bother me too much.”

So when Shifting Vision, the Edouard Sterngold-helmed curatorial platform bridging the gap between traditional and NFT artworlds, reached out to Arad, he was planted in a potentially skeptical tract. “Lucky for them, I didn't have anything to show them to say I don't like you,” he recalls, “but I really liked the conversations with them, everything made sense, and I thought it [was] a good opportunity.”

The ensuing project became Reverse Again, a digital reinterpretation of some of Arad’s past exhibitions, like In Reverse, which featured crushed Fiat 500s, more demonstrative of a tapestry than a Turinese automobile. Included in the collection are reworkings of Arad’s Slow Outburst film (15 editions with various shades), a 1-1 edition of Slow Outburst, Little Yellow Car, and Let’s Drop it, Ok?, a series of rendered images of Arad’s Roddy Giacosa, a mold that was used to fit the metal panels of the Fiat 500.

Liam Casey (ZORA): Reverse Again is your first NFT series. Did it come to you clearly early on, or was it a completely abstract concept?

Ron Arad: The mechanism is important for me. The main thing is: For what? In the old days, with architecture, the building of cardboard models was very important. But today, we can have a video. We can walk through a building that doesn't exist.

After I had my retrospective at Centre Pompidou, MOMA, the Barbican, I had a lot of pressure to do a retrospective in the museum that I designed outside Tel Aviv, the Holon Design Museum. I wanted to do a show that transitioned between manual and physical to virtual. I came up with the idea of doing a show that's called In Reverse. Normally you start with the paper and then you build and it becomes a three-dimensional thing. I intended to do the opposite and to take things that are three-dimensional and functional and turn them into 2D. In Reverse was about the physical, the manual, the real, and the virtual. I took all sorts of prisoners. I took Fiat 500s—this perfectly three-dimensional, really functional object—and turned them into useless, two-dimensional things. I flattened the cars.

And then I thought how do we make this into something that makes more sense in the NFT world? It was a very good way of taking something off the shelf and making it more relevant to the discussion today.

LC: JG Ballard, the English author, organized an exhibition in 1970 at London's New Arts Laboratory, featuring totaled cars; Crashed Cars. He argued that a car crash was a tremendous sexual event, a liberation of human and machine libido. Was Ballard ever on your mind in developing In Reverse?

RA: I read some of his books and loved some of his books—how can you not? But I never put it in that category. For me it was more to do [with]—I called them 'pressed flowers.' I was more interested in talking to the Italian family—not far from here—that worked to get 500s. When I approached them, they looked up to my Fiat 500. The only one question that I found very difficult to have a good answer to [was]: ‘Why did you crush your Fiat 500?’ I said, ‘It's in the studio; it doesn’t work.' I used to say it will become art one day.

When I told them what I wanted to do with the car, they literally cried: 'How can [you] do that?’ I told them, ‘Look, I'm not destroying it; I'm immortalizing it.’ They got it, and were instrumental in the separation. They helped me.

LC: You once said that you don't need a passport to go from one discipline to another. What discipline do you still wish to further discover or tinker with?

RA: I wish I was a ballet dancer. Some people do amazing work in one discipline without deviating. I wouldn't expect or want [Alberto] Giacometti to do anything else; I wouldn't expect him to go and do collages. I don't think there's any recipe or formula of how things should be. I can only talk about how I am. I don't enjoy the religious architectural profession. I don't enjoy a profession that starts with constraints. Oscar Wilde tried to describe art as something that doesn't have a function.

LC: There's a larger conversation happening now about the limits of NFTs and the channels through which they're exhibited in real life. Having an industrial design background, are you ever curious about alternative or experimental mechanisms to present NFTs that aren't just a screen?

RA: I'm very curious about everything. I'm more interested in what the art means, rather than the mechanism, but the mechanism can be very interesting. Galleries are not temples. They had a problem with the auction houses, and now the NFT. In a way, it's all good that there's different mechanisms to make art available to the audience, because without it, there would be no art. That's the way it is. And sometimes, the mechanism actually affects the content.

LC: Do you have any explicit metrics of success for this project? Is there such a thing in your worldview as success?

RA: Of course, I want it to be very successful, but also it's a prison. Am I an expert in it? No. I'm ignorant.

LC: Looking retrospectively, what excites you about art the most? When you wake up, what sparks your curiosity?

RA: If you had something in the evening that didn't exist in the morning—that is exciting. And it's always the ideas that you keep to yourself that are worth investing time and energy in. Recently I did a piece based on The Thinker, by [Auguste] Rodin. I asked lots of friends and artists to pose like The Thinker and put them on his pedestal. Last week I went to the foundry and I saw the finished piece in bronze. Now I have to think where to launch it: Where is the best place for it? Maybe next week there'll be another one.

LC: What is on the horizon for you with regards to NFTs and the project in general? What are you most looking forward to? Are you curious about further exploring art within blockchain context?

RA: There are tons of new ideas. Ideas are the easiest thing in the world. The big problem is to know which ideas you invest time and energy on. I have a very easy formula: I just imagine if I saw someone else doing it—would I be jealous? And if the answer is yes, then I'll do it. If the answer is no, then I won't do it. It's very simple.

Note: This article has been edited for length and clarity.