There was a resurgence of artistic energy at Public Works Administration’s Lowline: a digital art exhibition in the 50th Street subway powered by NFTs 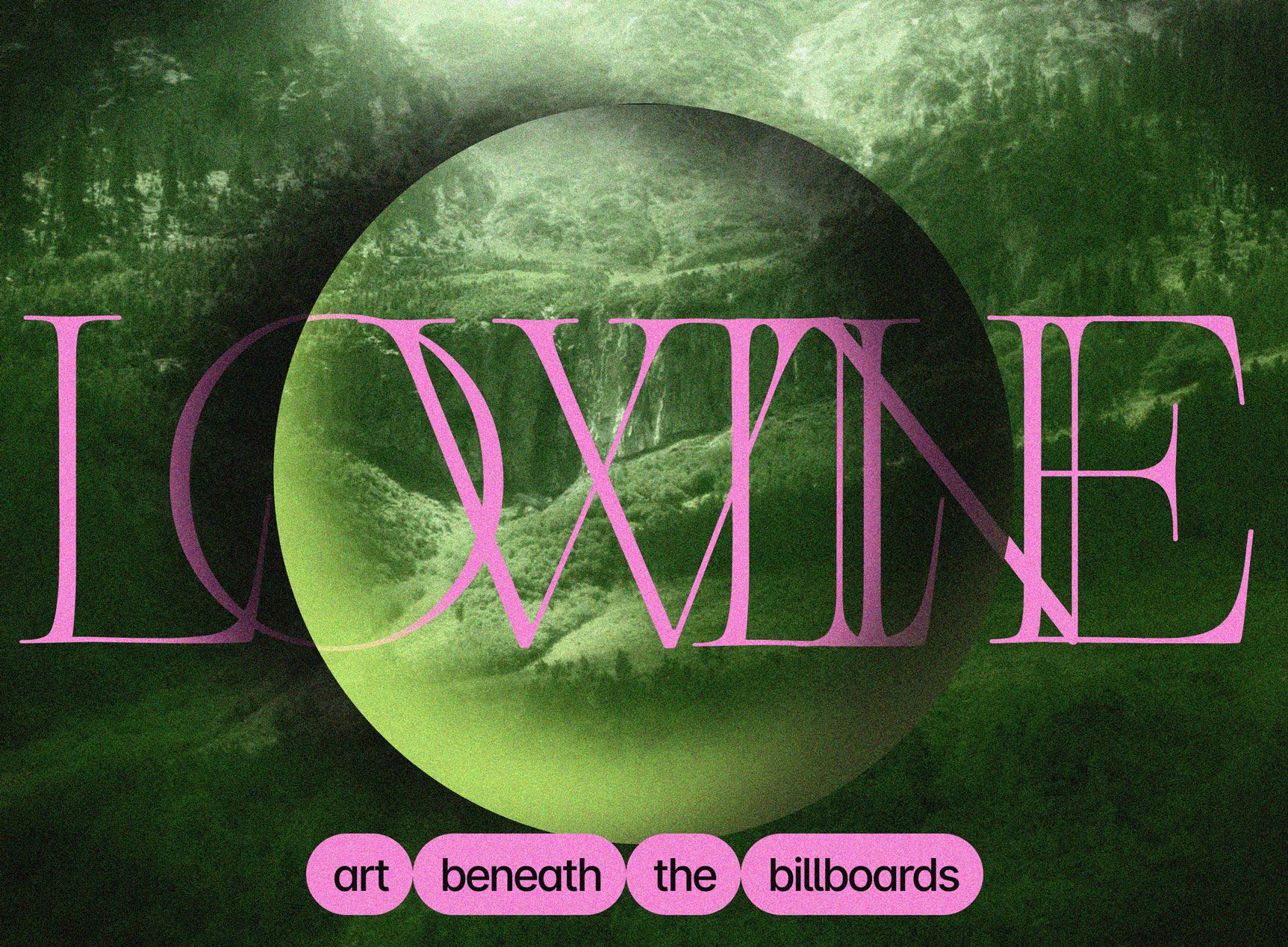 Emerging from the depths of New York City’s subway system tends to be an experience most rush through. Yet upon exiting the screeching 1 train at 50th Street, commuters pause as the beat drops in a color-soaked corner of the station. Wrapping last month, Lowline, an exhibition at Public Works Administration (PWA) occupied an abandoned subway retail space. Appropriating their name from the New Deal government project, the novel digital art gallery is founded to support a community of artists who overlap the worlds of crypto and critical technology. A lack of curation has left the online space of NFTs often resembling a newsfeed. In response to this, PWA is intent on creating an experimental space that can supply context to digital art. Within the Times Square subway station on Broadway, it’s also not alone.

Steps away from the new gallery behind an unmarked door, sharp red neon illuminates the reflective surfaces of Nothing Really Matters, a cocktail bar hosting the exhibition’s curated DJ sets. For PWA’s owners Alison Sirico and Sam Black, alternative collaborations in music and digital media are nothing new. Sirico, the co-curator of Alt-Esc, and Black, a promoter known for Renegade Rave among other events, have a history of using art and sound to engage neglected spaces. No Vacancy, an offshoot of Alt-Esc, was a biannual event series that invited artists and musicians to take over defunct warehouses in Brooklyn, drawing thousands of people in a cross-pollination of musical and visual expression. Additionally, when Black isn’t scouting locations for designers such as LaQuan Smith, he’s running guerrilla marketing agency BLMKT, which offers alternative strategies to companies who don’t want to play by the rules.

Among NYC’s many visitors are swaths of tourists who travel to Times Square to witness their favorite advertisements on gargantuan LED screens. It’s an attention-fragmenting experience of pulsing hues and civic engineering combined with creepy photobombers and the occasional naked senior citizen coated in paint. Native New Yorkers avoid this sensory overload like the plague, but a mix of corporate exodus, shuttered retail space, and post-pandemic wariness has made this part of the city feel edgy again. Getting back to the gritty reality of Times Square IRL, it’s hard not to reminisce about the groundbreaking Times Square Show, which saw a similar opportunity in a devastated New York. Taking a DIY approach, a new generation of artists redefined collaborative engagement in an ever-evolving program running 24 hours a day for 30 days in June 1980. Occupying a closed-down massage parlor on 41st Street and 7th Avenue, the Times Square Show was organized by artist group Collaborative Projects, Inc (or Colab) and hosted an ambitious number of artists working across performance, painting, fashion, and sculpture. Self-proclaimed “Queen of Times Square” and original Colab member behind the Times Square Show Jane Dickson notes: “Artists are always looking for new creative outlets. It was different back in the 80s because real estate owners couldn’t do anything with their properties,"she says. "Times Square was getting demolished for the most part. We were staying in a building on 43rd St technically not legal for living. All tenants were scheduled to be cleared out by NY state eminent domain for redevelopment.”

When artists turn desolate spaces into cultural hubs, serendipitous relationships interconnect communities. Oftentimes, corporate developers jump on this flux as a means to profit. But when hyper-commercialization exhausts itself, all that’s left is a soul-sucking vacuum. “Artists get used through real estate—people are always following us,” says Dickson. In Times Square Red, Times Square Blue, writer Samuel R. Delany discusses the development of Times Square in terms of the contrast between “contact” and “networking.” Delany describes “contact” as “what people have to do when those with like interests live too far apart to be thrown together in public spaces through chance and propinquity.” “Networking,” on the other hand, is “professional and motive-driven.”

Both the Times Square Show and PWA are invested in creating a space that goes beyond transactional networking to nurture an affinity between people who might not associate under different circumstances. Finding inspiration in overlooked brick and mortar, PWA coordinates a diverse artistic resilience to bring new work to the forefront. This new work is situated between born-digital art and NFT minters. Nevertheless, selling NFTs isn’t so much the gallery’s mission as creating a conversation between those who might call themselves “NFT artists” and original pioneers in digital media. At this point, anyone with an After Effects account might be sitting on a goldmine of GIFs. Still, as Sirico notes, “the juxtaposition between those entering the space from both ends of the spectrum form a community I’m interested in bringing together.”

The show’s title Lowline refers to the stalled construction project in Manhattan that would have been the world’s first underground park. Motivated by a vision of a natural world sustained by man-made resources, Lowline focuses on digital art that both fetishizes nature through digital tools and questions how nature is mediated through technology. The show features work by Irina Angles, Ikaro Cavalcante, Petra Cortright, Mark Dorf, Katherine Frazer, Sophie Parker, Signe Pierce, and Felipe Sepúlveda. All eight artists grapple with nature as a form of architecture that can be layered, intersected, liquified, harnessed, or rebuilt. Front and center is Sophie Parker’s Nature Below the Grid (2022), a large arrangement of plant life partially painted by the artist. As the work wilts over the course of the exhibition due to a lack of sunlight, Parker reminds us that, despite the ambient light of back-lit screens, photosynthesis can’t be plugged in.

Themes of currency, nature, power, and energy also reflect the realities of making art with a Proof of Work protocol. As many works here are linked to smart contracts, in some cases they also function as trailers attached to more significant projects by the artists. Mark Dorf’s 01 A New Nature from his film A New Nature (2021) regenerates a sleek interface that interacts with a hyper-realistic video of lush forestry built through scans and photogrammetry. In the subterranean setting of PWA, it’s hard not to feel like Dorf is romanticizing a digitized memory of nature that might one day vanish from a hard drive. Across from his work, Irina Angles’ video dance performance Florametry (2019) approaches a clash of nature and structure through choreography. In a meditation on beauty in a world of uncertainty, Angles uses sharp arm movements to intensify her position between vegetation within the Kyiv Botanical garden. Opposite to Angles, the static image of Katherine Frazer’s Evasive Manoeuvre / Summer Bloom (2022) reinterprets UI/UX software to generate a digital painting. “I’m using raster assets in a vector-oriented tool,” Frazer tells me, “but more importantly flipping ’productivity’ software on its head to act as a space for play and world-building.” Frazer’s composition bears a tension between 3D and 2D reality, much like a futuristic take on Flemish painting, which compressed elements in the foreground and background to exist on the same plane.

Beyond PWA’s collision of artists, the gallery is working with established and emerging DJs to present a soundtrack absent in the silent scroll of NFT platforms. During the opening of Lowline, DJ sets by Memphy, Pauli Cakes, Angel Money, and THELIMITDOESNOTEXIST took place opposite the gallery at Nothing Really Matters. Red carpet ran 20 feet down the dimly lit hallway, connecting the bar to the exhibition. While bouncers checked IDs behind velvet stanchions, music pumped in and out as bystanders halted in wonder as to what was going on. The who’s who of the digital art scene were all out in thrall. While transforming dead retail to present a new form of digital media isn’t necessarily novel, PWA’s elixir is certainly working its magic.