From E.A.T. to the Metacene: Julie Martin and Rachel Rossin

Despite operating years apart, there’s an inimitable and intuitive resolve in Julie Martin and Rachel Rossin’s practices, an overarching continuation of technology’s promise and the interweaving between art and engineering. New York-based arts organization Rhizome honors them both for their annual benefit.

written byGracie Hadland
Posted On31 May 2022 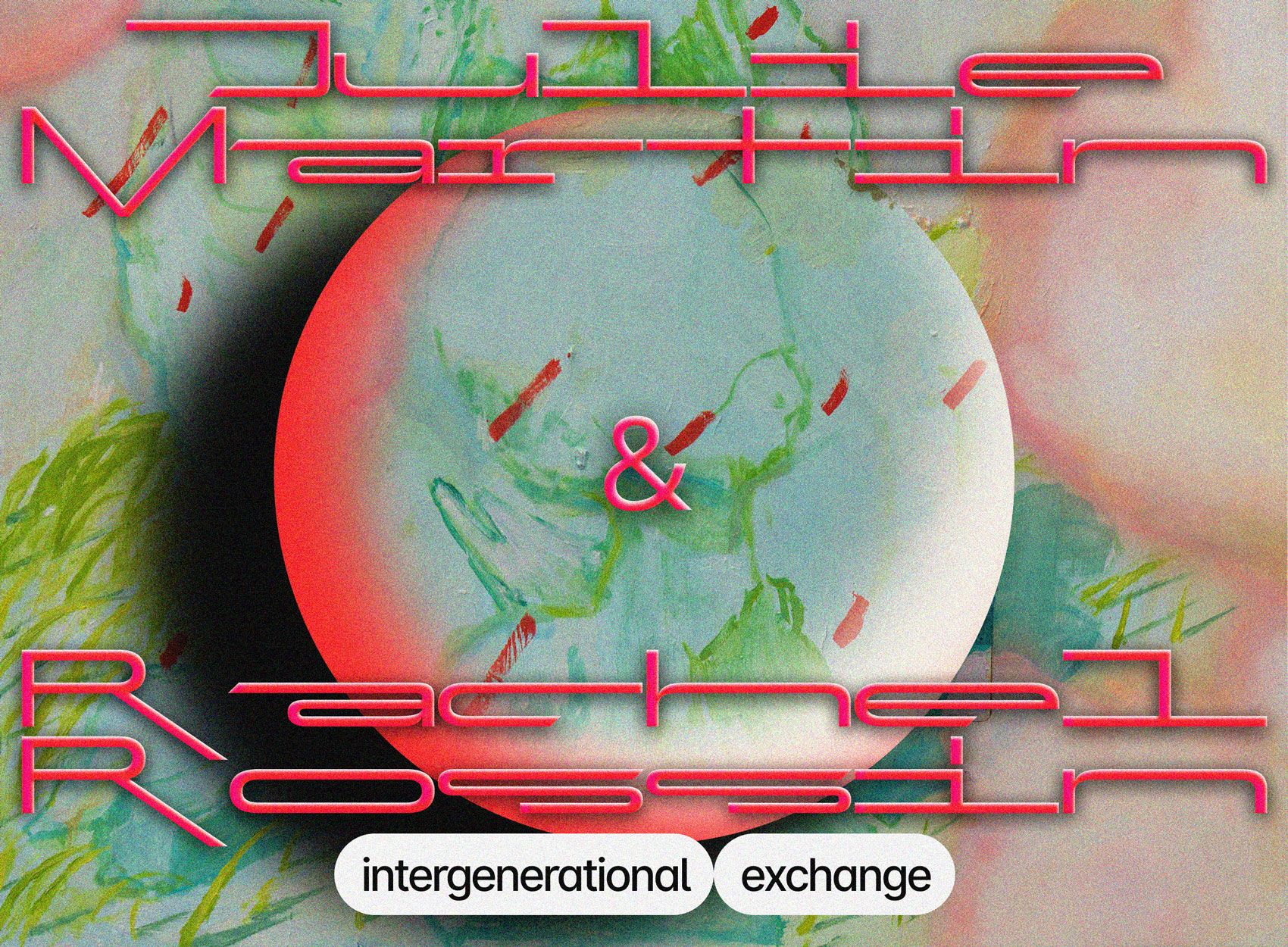 As with many emerging technologies there is a divisiveness around them; at once an equal level of enthusiasm and skepticism. Sometimes this divide happens between generations: the younger generation more optimistic, the older more ambivalent. In considering this tendency, Zora spoke with two artists from different generations, Rachel Rossin and Julie Martin, whose practices exist at the intersection of art and technology, sharing an interest in collaboration between disciplines. Rhizome will be honoring the two at this year's upcoming benefit.

Martin was an instrumental figure in Experiments in Art and Technology, the non-profit organization founded in 1966 that paired engineers with contemporary artists (Robert Rauschenberg, Andy Warhol, John Cage and Yvonne Rainer among them) to collaborate on various projects. “The 60s were so different from the late 50s—this idea that we were really making progress, that technology was burgeoning,” recalls Martin. “And so [artists] got interested in the possibilities of the technology; people used technology to fulfill some idea that they had, that they wouldn't have been able to do.” She speaks of the early E.A.T. days when the attitude from artists and engineers alike was an enthusiasm for the new technologies, and an optimism for new ways of working. “It was a time where the technology was really beginning to develop and artists were really interested,” she says. “People read Scientific American. Technology was this idea of very positive progress.” The group worked beyond the art world as well, producing quasi-guerrilla projects in various fields, from development to education. They were often moving in the direction of social practice, wanting to branch out of both the fine art world and the engineering world. The group also serves as the model for Rhizome’s platform, Seven on Seven, that arranges collaborations between tech and art.

Rossin, who has been making work with technology, programming, and gaming since her youth, says she takes an agnostic approach to her medium, trying to avoid fetishization. “There are generation-based alignments towards where we are with technology,” she says. “We're entering a time now where it's so ubiquitous we're starting to question our autonomy and our relationship to it.” Growing up with the technology she works with now, she’s witnessed the shift in its presence, observing the way people relate to it now. “But in a time when it was nascent, it was a more free space,” reminisces Rossin. “When I started learning how to program, it was just this alternate, sort of a parallel world that I got to access. It wasn't something that was sitting on top of me all the time like it is now.”

There is an immersion in technology that everyone is subject to today that sets this moment apart from that of E.A.T., when digital infrastructure was less imposed upon the individual. At the time of E.A.T’s founding, engineers and artists were essentially isolated from one another, working in silos. Now, due to the level of digital literacy that everyone wields, or people of a certain generation have, it's as if there's an imperative to make art using, or engaging with, the digital media of today. “You're steeped in it, so you're making something out of the soil that you're growing in,” Rossin observes. “But then you always see a counter to that, and that's the great dialectic of just seeing art movements. The response to this is then the trend of traditional painting.” She also remarks on the accelerated virtualization of so many experiences and the desire to escape the digital for the physical. “Because everything has gotten so virtual, I really crave just pushing lipids in oil around right now, making sculptures, and doing things that are very physical.” In some ways, this parallels E.A.T.’s decision to focus on technological experimentation in a broader sense than just the computer. E.A.T’s output included immersive installations and choreographed dance performances, far outside the bounds of a computer monitor.

Rossin has always been interested in exploring ways to transfer the digital into the physical world. She recently minted an NFT using the code of her sequenced genome, in a work called Rachel Rossin’s Raw DNA (2021). The work came out of the artist's interest in the trajectory of biology and technology moving to wetware. “I started to learn through a biologist friend of mine how to code in DNA. It's like, what is DNA? It's partially a blockchain,” Rossin says. “And the blockchain is a record of time. I just wanted to put it in the blockchain as a way to talk about where I think technology is headed, which is wetware. We'll begin to start coding in genetic material and living tissues.”

The technology as it evolves seems to get further away from the body producing the kind of alienation that is the subject of so much digital work today. Rossin observes this shift in biotechnology in the way one might have attached something to the body to extend its capabilities; now these capabilities are becoming more cognitive. “You become part horse, you ride the horse, and now you're as fast as the horse. And thinking about how the definition of technology has shifted to be so more the space of the mind, our peripherals are no longer just things that were attached to us, but it's their peripherals for cognition.”

This extends to economics and the kind of labor we produce; the kind of labor becomes more immaterial, cognitive and emotional. “In the late 60s, because the corporation was such a monolithic institution, it was easy to recognize the difference between individual and corporation,” remarks Michael Connor, Artistic Director at Rhizome. “I think we're in an interesting phase now where corporations are very diffuse entities often and people's participation in them is very fluid sometimes. The corporation has entered into this phase of networked levels of ownership and status and control. Today, I feel like we have a much more layered relationship where extracting the person might actually be harder because it's difficult to understand where these boundaries lie.”

E.A.T. focused on individuals and their specific abilities or knowledge while also considering the work in a larger context. The project allowed for engineers to work outside of the goal or product oriented pace of the corporation. Τhey were able to consider the process over the product, using their skill set for a different end and in a different environment. They were able to become more creative in their work. “The artist,” Martin says, “by being more knowledgeable about the technology, can become more relevant to the society and to be active in the society.”

The optimism of which Martin speaks emerged from 60s and 70s counterculture, when cooperation in the name of progress felt possible, and a revolutionary fervor defined a generation. “It wasn't political, but it had this idea that you're going to make things better," Martin recalls. “We thought the world was changing.”

Hearing Martin speak of this utopian mindset, one can’t help but think of the similar rhetoric surrounding crypto and Web3 today: the optimism about the budding technology; ideas of a utopia, even if naive, permeate the culture surrounding it. Many of the platforms and companies involved with Web3’s rise base themselves on progressive tenets: more autonomy to the individual, redistribution of wealth, and disrupting power structures. “It was a utopian idea that artists, engineers working together would be able to push the technology in a way that was more relevant to human beings,” iterates Martin. “That the artist was the person who had the sense of humanity, had the sense of individual development—and the fact that if they could work together with engineers, that was the idea that could make engineering relevant to the individual and not just develop this momentum of its own.”

But Martin also wonders if the hyper acceleration of new technology might hinder artistic engagement, if artists will tire of burgeoning media and not be interested in the next thing that rolls around. “I think having the fluency is important,” Rossin weighs in, remaining wary of embracing a blind optimism. “I'm pretty competent in hardware and engineering and programming. We’ll start to see brain and machine interfaces, neural implants—that kind of stuff. I probably will not opt for a bunch of different reasons, mostly because I don't trust the technology, because I know it.” She continues, “I think part of the problem that we're in right now in regards to autonomy is that we don't have enough literacy for these things.”

Ultimately, Martin remains curious about the possibility of artists' engagement with technology, pushing work into something more creative and mysterious. “It's also about that leap that you can’t explain,” she says. “And I think as an artist, that's what's exciting, that leap. Somehow the work is something different, in intuition or whatever you want to call it. It takes you beyond.”