Iman Europe Wants You to Know Your Worth

Head of Artist Relations at sound.xyz, Iman Europe confides in Latashá Alcindor on her music career jockeying between LA and New York, creative plagiarism, setting professional boundaries, and knowing when to say "No" 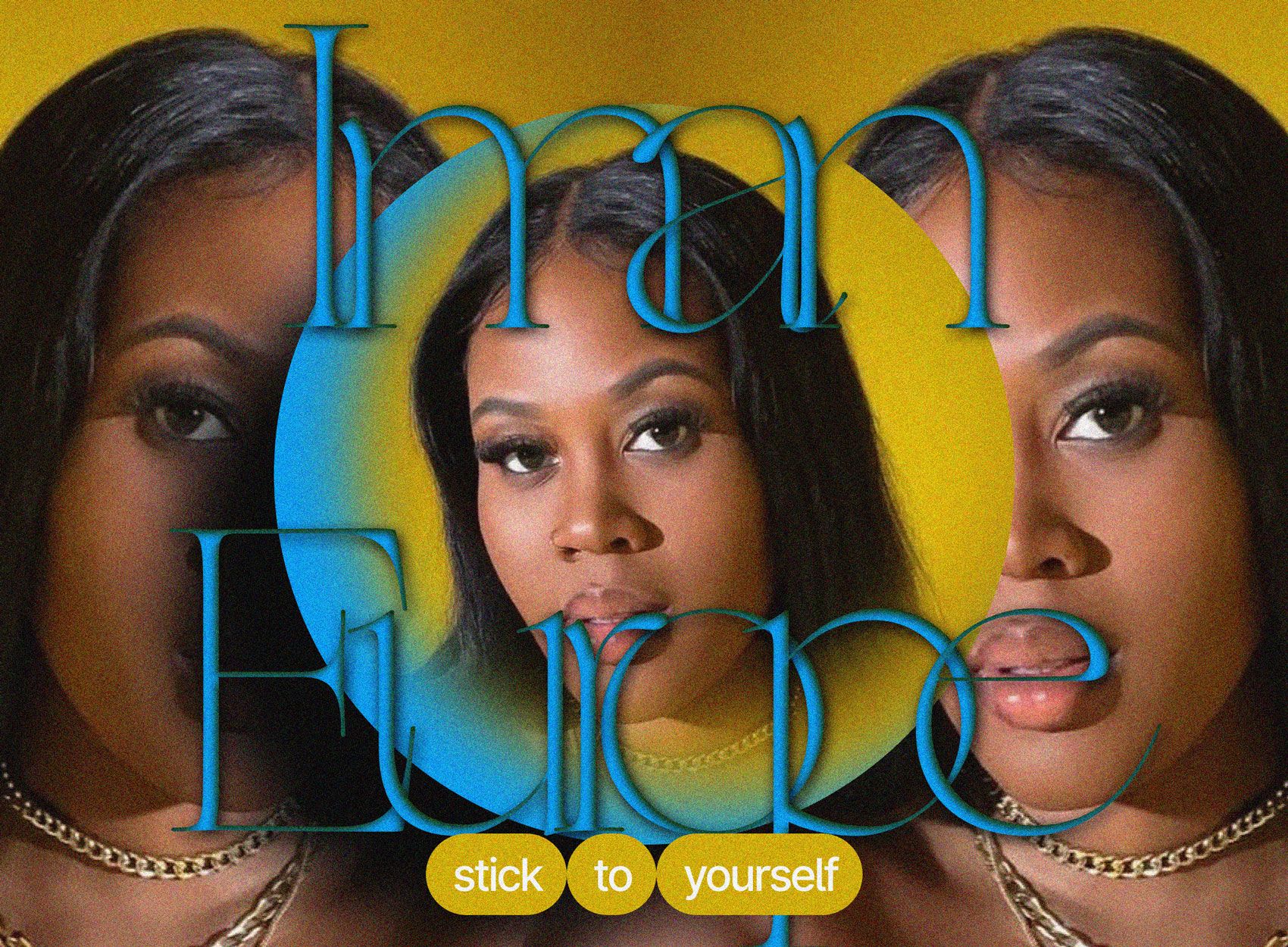 For many creatives, there’s often an inevitable moment in which an offer manifests, bringing about some material change, but at the expense of the creator’s integrity. The Faustian Bargain rests on, or maybe crushes, one’s shoulders, each side dictating the right path. Iman Europe’s guardian angel, the side of rectitude, appears to have hands.

Latashá Alcindor (ZORA): Who is Iman for the folks who should know you?

LA: When did you start your journey into music?

IE: My mom told me I started when I was four years old. I started playing piano around age seven. I majored in creative writing in college where I paired the writing with the music and became a songwriter. I started experimenting with performing for the first time in college, too. It was really weird, my friends would have to come on stage with me because I was so nervous and geeky. But eventually I got used to it and was received well.

I started putting out a little project here and there. I linked up with my other friends that were making music. I moved to New York after college and put out my first EP. My second EP was my first actual piece of music made in a studio. Then I came back to LA to do my first album. It was released in Japan before the U.S. I’ve just kept going since then. I’ve known that I wanted this to be my purpose for maybe ten or eleven years now.

LA: What made you want to stay independent as an artist?

IE: When I would get these contracts, or when I would get these opportunities, there was always this quiet voice in my head whispering, ‘No. You can't do that.’ I remember the first deal: it was for $60,000, and I was broke—literally eating Top Ramen. I'm talking about sandwiches for dinner. Thugging it in the Bronx. I had no reason not to take 60 bands. But that voice said, ‘No. You've got to get more than this. You deserve more than this.’ That followed me for a really long time. And I looked really crazy. I had family that looked at me like I was crazy. They didn't understand what I was doing. But you’ve got to have that voice inside of you to push you forward.

LA: What was it about your spirit that kept you going with the 'No?'

My first EP was called Caterpillar. It was about how uncomfortable I was where I was: being broke in New York, freezing in the Bronx, having to walk half a mile from my apartment to the train station every day. Coming from California, I was like, ‘Man, why am I here? What am I doing?’ But I always felt like there was more to come. My life was going to matter beyond what I could see. I felt it in my spirit. God was telling me what was meant for me—that was my driving force.

LA: Then what got you into NFTs?

IE: People ask me about NFTs all day, but they don't understand how much of a spiritual journey I was on before NFTs. Before NFTs, I had to be alone. I had to sit with myself. I had to recalibrate. It's the equivalent of a cocoon or a chrysalis.

LA: I have an album called Chrysalis. That's so funny.

LA: Twins. It's scary as hell.

IE: I took so much time, Latashá. I complained to everyone I knew: ‘I don't like the industry. I might give up. I might move on. I might become a teacher. I might go back to school.’ It came to a point last year where I felt emotionally exhausted by the music industry. I had been fighting an uphill battle for ten years. I took the year to really ask myself what I wanted in life. How I wanted to show up, and how I wanted to be in the music industry. I knew I wanted to do music, just not in the traditional way. I was set on that. And, during that same time, a white man stole my quote.

LA: I remember this.

IE: And said that it came from his damn brain! Oh, I was livid. I was so mad. I made a TikTok. I called him out. That went crazy. At the same time, I started learning about NFTs. I was hearing: NFTs, NFTs, NFTs. I thought, ‘I wonder if I could NFT this tweet?’ And I did it. Around the same time was when you started popping up on my timeline. We had just followed each other. I tweeted like, ‘Yo, this girl Latashá—she's super cool. She inspired me with this NFT stuff.’ I had a meeting with Dee and he broke down the whole thing to me.

"
I think I’m healing because of the community I'm surrounded by—a community that literally goes against the grain, shows up for me.
"

"
I think I’m healing because of the community I'm surrounded by—a community that literally goes against the grain, shows up for me.
"

LA: Yes. I remember when I first got introduced to your work. I was going to onboard you onto Catalog. I remember telling them, ‘You guys need to be ready for Iman when she gets here.’ The fact that you were bringing in this spiritual vibration really channeled my heart. I don't think everybody understands it when they get into this space. When we did Zoratopia, you said, ‘Ethereum is an energy.’ That was it.

IE: That was it. For real. Energy is why I was attracted to this space to begin with. It's new energy and that was exactly what I needed, it's what everyone needed. This is a real transformational process. I always want to highlight that in my music. I wanted to enter into this space on a spiritual wave, because that’s what led me here. I had been practicing my affirmations for a really long time. That has become a daily practice for me. Someone—maybe you—told me, ‘Make your Genesis be something that you're okay with it being your Genesis forever.’ Something that is not just in this moment. I definitely wanted to make sure to incorporate spirituality and affirmations into my Genesis. I have an affirmation book.

LA: Where do you get your affirmations from? Some people are Buddhist, etc. Do you have a practice?

Affirmations started when I was going through the healing process after a hard breakup. I was losing connection with people that once mattered to me, like family or friends, and having to go to therapy and heal myself. I was trying to become the best me. I was trying to rebuild all the way up. I still do my affirmations every now and then. I have a board and I'll write one down. What brings me a lot of comfort is, ‘Que será, será; What will be, will be.’

LA: Now that you're in this chaotic world of Web3, how are you staying spiritually aligned? How is the technology supporting your alignment? How is it deterring you from your alignment?

IE: This is going to sound crazy: I keep trusting God with more things. I keep needing God more. I think that's how relationships work: the more that you show vulnerability, the more someone feels like, ‘Wow, you trusted me with that. Let me prove that you can trust me.’ It's a give and take.

LA: I feel you getting into NFTs healed some material wounds for you.

As far as finances, I thank God. More reasons to give back. I remember being broke like, ‘I can't even help nobody even if I wanted to.’ I don't like not being able to help; now I can. For instance, my close friend and long-time producer’s father passed away right around the time that I was joining Sound. We did a Collection of 50 with a song that he produced. I was able to give him the money to bury his dad.

LA: How do you utilize the power of ‘No’ and keep your spirit at the forefront?

IE: Something in me says that I have to save everyone. That's cute but it's not realistic. I'm finally surrendering what I can't do. I won’t be able to help everyone. You have to set boundaries.

So for how I’ve been negatively affected—the amount of screen time required in Web3—it really takes away from me-time. I like my me-time. My me-time is when I recalibrate and take care of myself, decompress, and go for a hike. On the weekends I try to be very intentional about not being on my phone.

LA: Where do you hope you could be in the next few years? What are some resolutions you're hoping you find from the technological negativity?

IE: I hope I find a way to be present even when I’m not. Right now we can be present when we're not physically present. I want to figure out a way to be online without being completely present. Put some s*** on auto. This is accelerating quickly. Quickly, and by the grace of God. But at the same time, it's a lot to keep up with. In a few years I'll be settled down enough to…

LA: I'm so excited for you, Iman. What you bring to this space is really special. You bring something that is true and from the heart. So few of us are heart-centered in this space. You’re an artist that started in the caterpillar stage, now seeing the NFT space/Web3 space as a possibility. What advice would you have for an artist getting into this space now?

The way life works—the way God works—is that you’re going to eventually become who you're supposed to become. So that should give you a little bit of warmth or comfort.